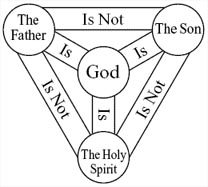 The Trinity is an unfathomable, and yet unmistakable doctrine in Scripture. As Jonathan Edwards noted, after studying the topic extensively, “I think [the doctrine of the Trinity] to be the highest and deepest of all Divine mysteries” (An Unpublished Treatise on the Trinity).

Yet, though the fullness of the Trinity is far beyond human comprehension, it is unquestionably how God has revealed Himself in Scripture—as one God eternally existing in three Persons.

This is not to suggest, of course, that the Bible presents three different gods (cf. Deuteronomy 6:4). Rather, God is three Persons in one essence; the Divine essence subsists wholly and indivisibly, simultaneously and eternally, in the three members of the one Godhead—the Father, Son, and Holy Spirit. (We considered the deity of Christ last Thursday, in this post .)

Yet, in exhibiting the unity between the members of the Trinity, the Word of God in no way denies the simultaneous existence and distinctiveness of each of the three Persons of the Godhead. In other words, the Bible makes it clear that God is one God (not three), but that the one God is a Trinity of Persons.

In the Old Testament, the Bible implies the idea of the Trinity in several ways. The title Elohim (”God”), for instance, is a plural noun which can suggest multiplicity (cf. Genesis 1:26). This corresponds to the fact that the plural pronoun (”us”) is sometimes used of God (Genesis 1:26; Isaiah 6:8). More directly, there are places in which God’s name is applied to more than one Person in the same text (Psalm 110:1; cf. Genesis 19:24). And there are also passages where all three divine Persons are seen at work (Isaiah 48:16; 61:1).

The New Testament builds significantly on these truths, revealing them more explicitly. The baptismal formula of Matthew 28:19 designates all three Persons of the Trinity: “Go therefore and make disciples of all the nations, baptizing them in the name of the Father and the Son and the Holy Spirit.” In his apostolic benediction to the Corinthians, Paul underscored this same reality. He wrote, “The grace of the Lord Jesus Christ, and the love of God [the Father], and the fellowship of the Holy Spirit, be with you all” (2 Corinthians 13:14). Other New Testament passages also spell out the glorious truth of the Triune God (Romans 15:16, 30; 2 Corinthians 1:21–22; Ephesians 2:18).

In describing the Trinity, the New Testament clearly distinguishes three Persons who are all simultaneously active. They are not merely modes or manifestations of the same person (as Oneness theology incorrectly asserts) who sometimes acts as Father, sometimes as Son, and sometimes as Spirit. At Christ’s baptism, all three Persons were simultaneously active (Matthew 3:16–17), with the Son being baptized, the Spirit descending, and the Father speaking from Heaven. Jesus Himself prayed to the Father (cf. Matthew 6:9), taught that His will was distinct from His Father’s (Matthew 26:39), promised that He would ask the Father to send the Spirit (John 14:16), and asked the Father to glorify Him (John 17:5). These actions would not make sense unless the Father and the Son were two distinct Persons. Elsewhere in the New Testament, the Holy Spirit intercedes before the Father on behalf of believers (Romans 8:26), as does the Son, who is our Advocate (1 John 2:1). Again, the distinctness of each Person is in view.

Today’s article was adapted from John’s commentary on 1-3 John.