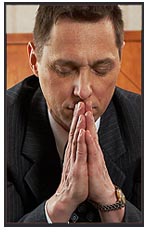 Before Jesus gave up His spirit as He hung on the cross, He took time to pray for those who were murdering Him. He prayed, “Father, forgive them; for they do not know what they are doing” (Luke 23:34).

God began to answer His prayer on the Day of Pentecost as some three thousand people repented and were baptized that day, and there have been countless multitudes that have been saved through the centuries. In response to Jesus’ intercession for the transgressors (Isaiah 53:12), God has snatched many souls from eternal death.

Do you have a heart to pray for the lost like Jesus did? Do you have the passion that inspired John Knox to plead, “Give me Scotland or I die”? Is your attitude that of George Whitefield, who prayed, “O Lord, give me souls or take my soul”? Do you, like Henry Martyn, mourn when you see others trapped in false religion and cry out, “I cannot endure existence if Jesus is to be so dishonored”?

God used those faithful men as powerful tools to bring salvation to dying people. Each of them had a clear and vivid understanding of what is at stake in the gospel — it’s an issue of life or death, an eternity in heaven or hell. Do you realize that your unbelieving family members, your co-workers, and your neighbors will spend forever suffering in torment away from the presence of God if they don’t embrace Christ? That realization should drive you to your knees to plead, not only with them to believe the gospel, but with God to save their souls.

Oh, if you have the hearts of Christians or of men in you, let them yearn towards your poor ignorant, ungodly neighbors. Alas, there is but a step betwixt them and death and hell; many hundred diseases are waiting ready to seize on them, and if they die unregenerate, they are lost forever. Have you hearts of rock, that cannot pity men in such a case as this? If you believe not the Word of God, and the danger of sinners, why are you Christians yourselves? If you do believe it, why do you not bestir yourself to the helping of others? (cited in I.D.E. Thomas, ed., A Puritan Golden Treasury [Edinburgh: Banner of Truth, 1977], 92)

It is one thing to pray for family and friends, those for whom you have natural affections. But God wants you to pray for all people. Paul writes, “First of all, then, I urge that entreaties and prayers, petitions and thanksgivings, be made on behalf of all men, for kings and all who are in authority” (1 Timothy 2:1-2). Kings and people in authority in Paul’s day weren’t bound by civil rights and were often unjust, self-serving, and cruel. Do you pray for the salvation of people like that — those who disagree with you politically, those who advocate ungodly agendas, those who openly embrace sin and reject the Scripture?

The Bible has several examples of radical evangelistic prayer, and for the worst of sinners. Here are a few examples:

Moses interceded for Israel after catching them in orgiastic idolatry at the foot of Mount Sinai. After he confronted and dealt with their sin, he turned to the Lord and prayed, “Alas, this people has committed a great sin, and they have made a god of gold for themselves. But now, if You will, forgive their sin — and if not, please blot me out from Your book which You have written!” Moses was willing to forfeit his life for his people, even though they were guilty of wicked rebellion!

While being stoned to death, Stephen followed the Lord’s example by praying for the salvation of his executioners: “And they went on stoning Stephen as he called upon the Lord and said, ‘Lord Jesus, receive my spirit!’ And falling on his knees, he cried out with a loud voice, ‘Lord, do not hold this sin against them!’ And having said this, he fell asleep” (Acts 7:59-60).

Standing among those who killed Stephen was a young man named Saul of Tarsus. His salvation was an answer to Stephen’s prayer. Years later, the apostle Paul communicated the depth of his concern for his people Israel, and in Romans 9 he sounds very much like Moses:

I am telling the truth in Christ, I am not lying, my conscience bearing me witness in the Holy Spirit, that I have great sorrow and unceasing grief in my heart. For I could wish that I myself were accursed, separated from Christ for the sake of my brethren, my kinsmen according to the flesh, […]Brethren, my heart’s desire and my prayer to God for them is for their salvation. (Romans 9:1-3; 10:1)

His brethren according to the flesh, fellow Jews, were the very ones who persecuted him so severely, disrupting his work, stirring up mobs, even plotting his assassination. And yet he loved them and prayed that God would show them mercy.

God honored those men’s prayers for the souls of the lost; He’ll honor yours too. Whether friend or foe; whether moral or immoral; whether you know them or not — pray for the lost. For those God brings your way, open your mouth in love and compassion to tell them the truth. Warn them of God’s judgment for their personal offenses against his holiness, but then tell them the good news. There is salvation in Jesus Christ from God’s eternal wrath, if they will only repent and believe. Once you’ve told them the truth, keep praying for them and trust God for the results. You will rejoice as you see God use you as He saves people from their sins and grants them new life in His Son.