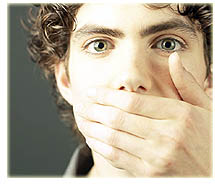 Can Satan hear what we say and know our thoughts? Should we avoid praying out loud because Satan might hear us?

There is nothing in the Bible to indicate that Satan is omniscient. There are no verses that say he knows everything or that he can read our thoughts. But he is very adept at predicting human behavior because he’s seen it operate for so long. He can anticipate what you might do in a given situation without knowing your thoughts because of his knowledge of humankind and because he has a supernatural mind.

But in terms of being omniscient and being able to read your thoughts (as God can), the Bible does not support that idea at all. It never tells us that angels are omniscient.And if a holy angel isn’t omniscient, neither is a fallen one. So, Satan can’t read our thoughts, even if he’s great at predicting human behavior because he’s seen so much of it.

I was speaking at a conference in Iowa about this problem. People were asking questions like “How do you deal with demons?” and “Do we need exorcism to get rid of demons?” Well, there are a lot of people today who say you do. I once read a book about deliverance in which the author described a doctor who was supposedly delivered from the demon of post-nasal drip. And in this approach, whenever you think you have a demon, there’s a certain magical formula you say or you run around or “plead the blood”—whatever that phrase means, since it’s not from the Scripture. The blood has already been pled in your behalf at the time of your salvation and that takes care of it.

There are people who advocate little formulas and séance-type practices with a Christian connotation, claiming that they can cast out demons and so forth. But when you get into the Bible, you find that dealing with the devil is really as simple as going to Ephesians 6 and putting on the armor of God. You see, in Ephesians 6, it says, “We wrestle not against flesh and blood, but against principalities and powers,” right? We’re wrestling against demons and against Satan.

But what do we do about it? The best place to find out is to read right in that same chapter, isn’t it? Notice that it does not say, “Go get your demons exorcised with a Christian exorcism.” Nor does it say, “Go get somebody to cast your demon out.” It says, “Put on the whole armor of God,” and what that whole armor really consists of is righteousness. The heart of it is “the breastplate of righteousness.” The key then is to live a righteous, Spirit-filled life and to trust in the sovereign power of God.

So, there is nothing in the Bible that says Satan can read our thoughts. Certainly demons can hear what we say. They can understand what we say. And as I said before, they are very good at predicting the common responses of man because they’ve been at it for such a long time.

But don’t worry about that!A lady once said to me, “We whisper,” because she was afraid of demons hearing her prayers. My response was, “Well, that’s foolish!”You can go boldly before the throne of grace. In the Old Testament, it doesn’t say, “And David whispered to the Lord;” it says, “And David said unto the Lord”—and out it came. You never hear any time in the apostle Paul’s instruction to us about prayer when he says, “Don’t talk out loud.” When he wanted to pray, he just flat out prayed and it didn’t bother him whether Satan heard it because he was living in such a way that Satan couldn’t do anything about it anyway. That’s the issue.